Rheinmetall is proud to present a brand-new module for its Mission Master XT autonomous UGV (A-UGV) at this year’s DSEI in London. Developed in partnership with MBDA, this new Fire Support module is the first iteration of the Mission Master XT launched in June of this year.

The new Mission Master XT – Fire Support is equipped with MBDA’s Brimstone missile launcher, a long-range, all-weather precision strike missile currently in service with the British armed forces. The Brimstone missile is effective against all battlefield targets, including main battle tanks and all known defensive aid suites. It can engage both line-of-sight and non-line-of-sight moving and static targets and operate in two engagement modes: radar and semi-active laser (SAL). Mounted on the Mission Master XT, this system can salvo-fire to engage multiple targets concurrently or a single target with total precision.

With this payload, the Rheinmetall Mission Master XT can autonomously execute many tactical tasks to give friendly forces an advantage in the field. Potential missions include ambush, attack by fire, support by fire, and suppression of enemy air defence systems.

This entirely new version is based on the Mission Master XT platform, the latest member of the successful Mission Master family of A-UGVs. The Mission Master XT thrives in extreme terrain. It easily tackles ice, snow, and sub-zero weather conditions, as well as sandy, rocky, and mountainous topography. Its advanced amphibious capabilities allow it to float and swim while maintaining its full payload capacity.

The diesel-powered engine allows it to travel 750 km without refuelling, while lithium-ion batteries enable up to 6 hours of silent watch operations. A continuous tyre inflation system adjusts tyre pressure as needed based on the terrain and keeps this powerful A-UGV moving even with 2-cm holes in the tyres.

As with the other modules of the Mission Master family, this version of the Mission Master XT owes its autonomous functions to the Rheinmetall PATH autonomy kit. PATH makes manned-unmanned teaming concepts possible by enabling the crews of armoured fighting vehicles such as the Challenger, Lynx and Puma to control the A-UGVs. The addition of these "wingmen" from manned vehicles results in a significant force multiplier on the battlefield. 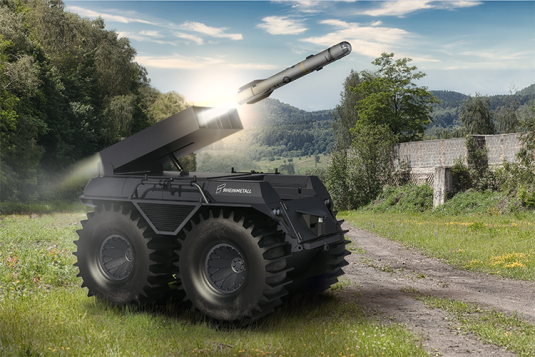