Rheinmetall Canada is a supplier of aviation ground support equipment, including Air Start Units and Mobile Start Units to start aircraft as well as Unmanned Baggage Handlers for removal of suspicious luggage.

Rheinmetall manufactures Air Start Units for commercial and military purposes.
The task to be performed is to start all main engines of today's and tomorrows generation of aircraft up to the most demanding B777-300ER and A380.

In 2018, more than 70 million airline passengers and nearly 45 million bags were screened by the Transportation Security Administration in the United States, and on a global scale, the International Civil Aviation Organization mandates that every piece of luggage must be screened. With so many travelers and bags passing through airports near and far, emergency measures that prioritize staff and passenger safety in the event of an incident are absolutely essential.

One such incident is the detection of suspicious luggage. On top of minimizing risk to personnel and bystanders, airports must also consider the financial ramifications associated with this type of event. Suspect baggage emergencies can last for hours on end, causing losses that are often denominated in millions. They can also lead to complicated evacuations, flight cancellations, and looming delays that greatly inconvenience thousands of passengers. It is therefore critical for every airport to address baggage threats as quickly as possible without endangering a single human being. 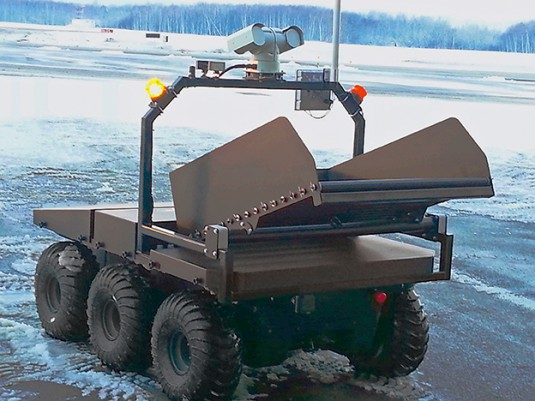 The Unmanned Baggage Handler (UBH) developed by Provectus Robotics Solutions, a subsidiary of Rheinmetall, is the fastest and safest way to remove suspect bags from airline terminals. Its remote operating capabilities keep airport staff and passengers at a safe distance, transporting suspect baggage away from the terminal so it can be inspected and neutralized by bomb disposal experts. This rugged vehicle can operate rain or shine, and can even traverse snow to a depth of 23cm (9in). Equipped with LED floodlights and HD cameras, it can get the job done day or night and ensure crystal-clear environmental data intake.