The Rheinmetall Group uses cookies saved to your device in order to optimise and continuously improve its websites, as well as for statistical purposes . For further information please refer to our imprint and our privacy policy .

You can close this banner and object to the use of cookies by clicking on the "X". Please note that a single cookie still needs to be placed on your device to save your selection. If you would like to ban cookies in general, you must do this in your browser settings.

Rheinmetall has a broad depth in producing and sustaining land and naval weapon systems for Canada and the international defence community. The strong partnerships with platform and weapon suppliers allow us to propose cost-effective and high-performance weapon systems for all kinds of missions. Several armed forces including the Canadian Army, Canadian Navy, French Army, and Belgian Army now field weapon systems produced and supported by Rheinmetall Canada in collaboration with its partners.

At Rheinmetall Canada, we not only manufacture complete weapon systems, but we also design, develop, integrate, and test components and subassemblies for the Rheinmetall Defence group of companies and for our key partners.

The CASW system is the army’s digitized 40 mm grenade launcher. It is a highly flexible weapon enhanced by the firepower of airburst and a new generation of high explosive, dual-purpose ammunition, making it the most technologically advanced solution to combat ground targets.

Rheinmetall Defence was contracted to equip the Royal Canadian Navy’s Halifax-class frigates with the MASS. This countermeasure system provides a unique level of protection against modern sensor-guided missiles on the high seas and in coastal waters, as well as from asymmetric terrorist-type threats. With the information from on-board sensors and systems, the MASS calculates the best missile defeat solution and, being fully trainable in azimuth and elevation, then fires the decoys and places them in time in the optimal position without the ship having to manoeuvre to obtain an effective countermeasure solution. 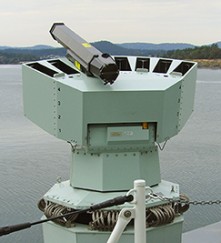 Fully automatic, MASS offers significant tactical, operational, and logistical advantages, and can be installed on any type of ship. It can be integrated into all naval command and control systems, but can also operate in a stand-alone mode.

MASS significantly enhances ship survivability through speed of response and the ability to put the required multi-purpose decoy rounds in the precise position necessary for optimum defence.

The MASS_DUERAS version chosen by the Royal Canadian Navy is a piggyback solution. It features additional launching tubes for distraction rockets mounted on top of the MASS launcher.